2012-2017
기억 Memories
Many moving has changed my perspective. One of my places was demolished and reconstructed into an upscale pizzeria. Every time I go back to the places I lived, I feel I am a wandering ghost. What did I leave behind? Perhaps nothing. Places do not tell but show and keep changing. I can tell with showing. On bottom of my memory, I can smell a hint of capitalism and nationalism. These are what I saw and wanted to show.

We are ghosts of gentrification, 2016

Our place was demolished at once and reconstructed into an upscale pizzeria. The place we used to live became the center of gentrification reported on in the news. Sometimes we wandered around there like ghosts, looking for a piece of memory. 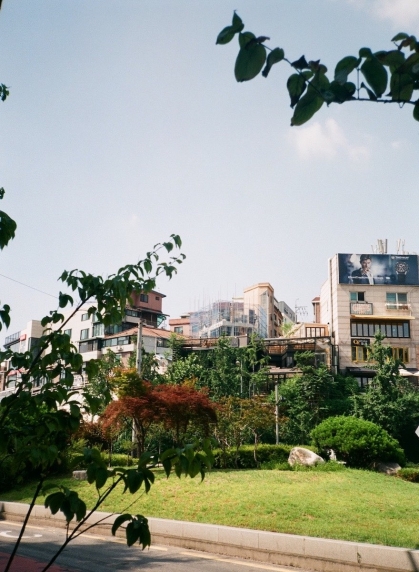 A panoramic view of an empty underground shopping mall on Sunday morning. 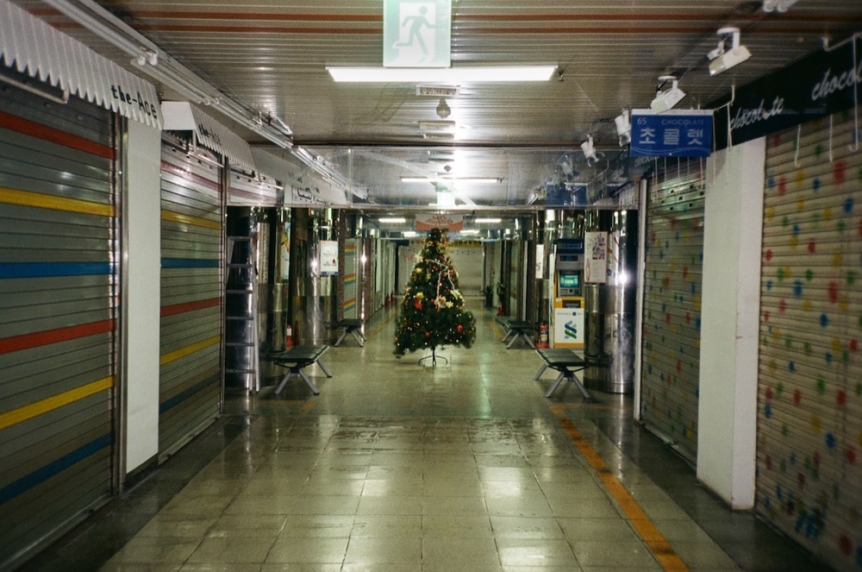 A wall around a construction site for tall buildings that symbolize a better life and future development. It is where the familiar old roads have
disappeared, and instead we see this fake forest that has replaced the living forest that had already been destroyed. People wait for someone while smoking against the backdrop of the fake forest. 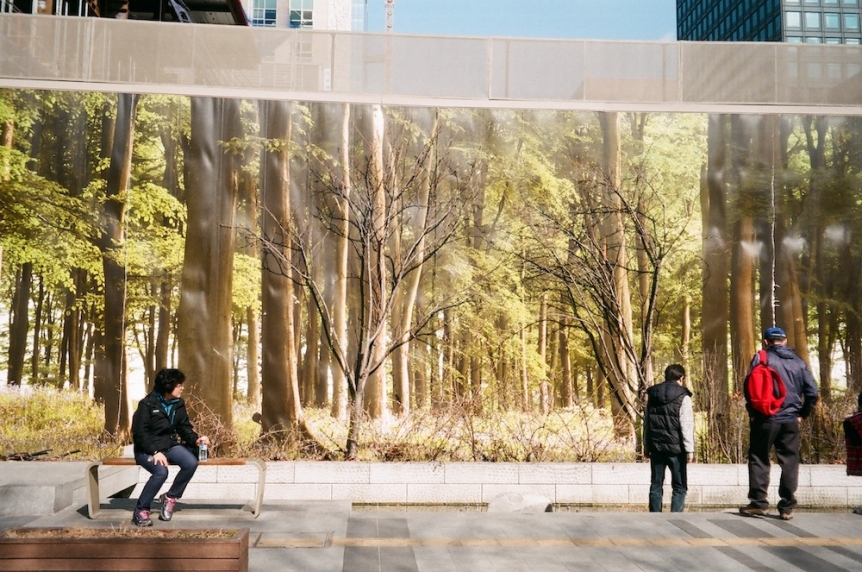 An inside view of a prestigious university in Seoul. A removable piece of the wall is erected in front of the building under construction. People are walking, paying no attention to their surroundings. 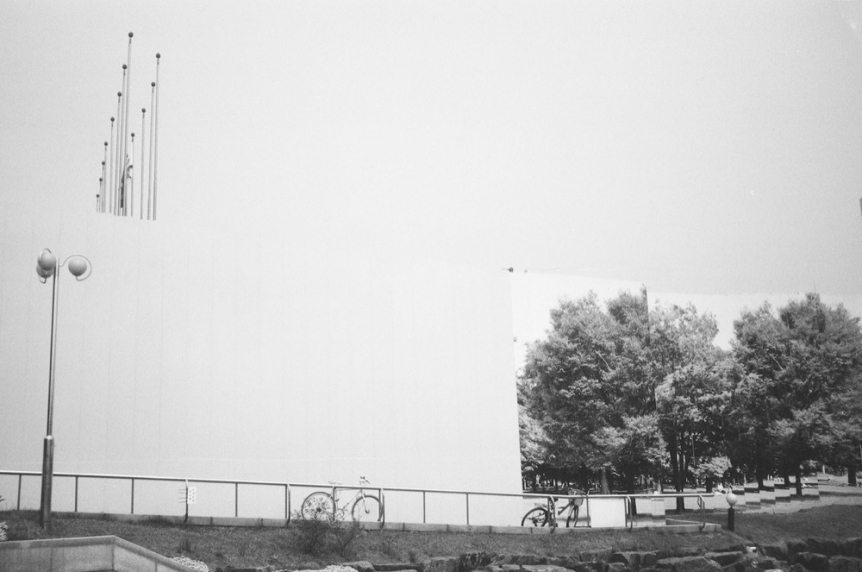 Jugong Apartment in Banpo-dong, Gangnam-gu, Seoul was the most expensive apartment in Seoul. As soon as the redevelopment project was
finalized, the transaction price exceeded 100 million Won (approximately 85,653 USD) per 3.3 square meters. The apartment, which was so expensive once, was demolished at such a rapid pace. More expensive apartments were built in the same spot. 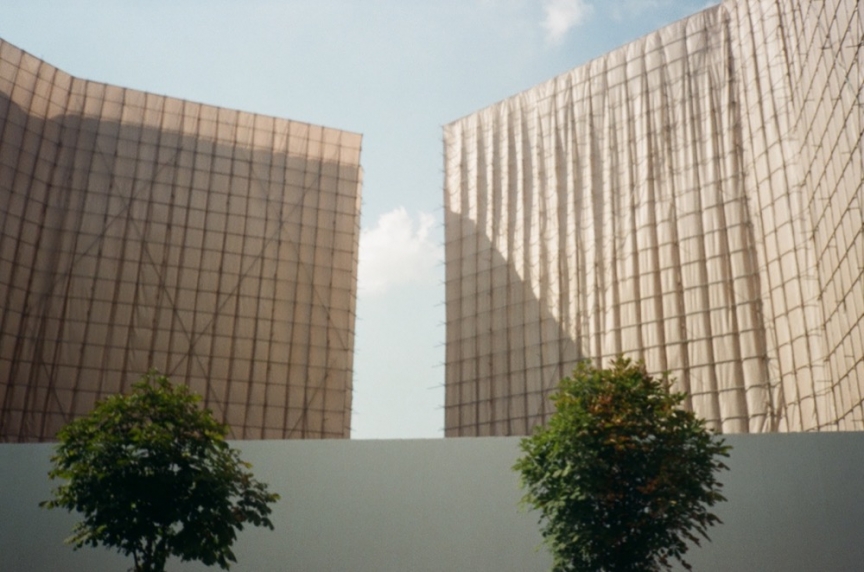 Gyeongbokgung Palace, where the king lived during the Joseon Dynasty. There is a crane behind the wall of the Palace. Perhaps there will be a high-rise apartment built there that overlooks the palace. 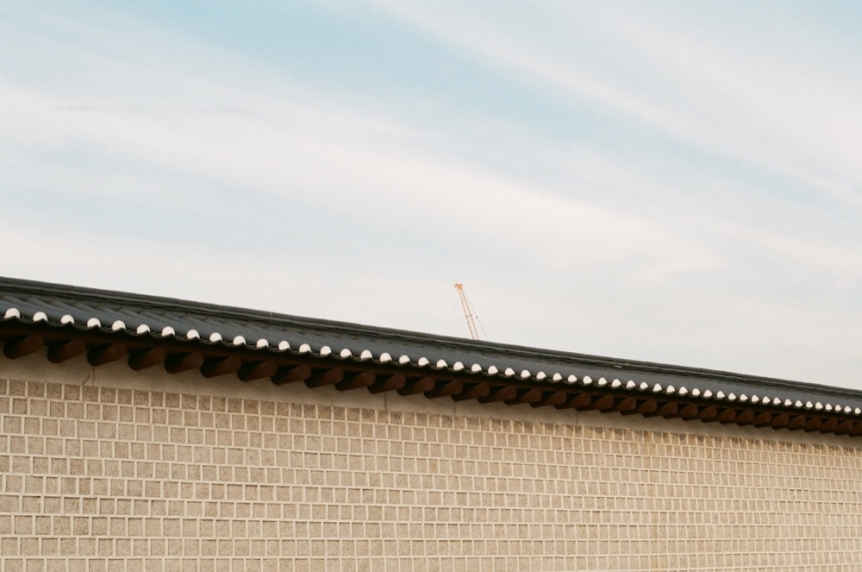 A crane rises in an imposing manner between the building and the large trees. 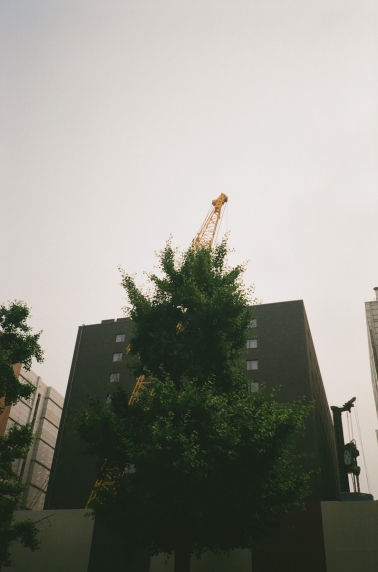 Tree of the Soul of the Tenant Who Died in Reconstruction, 2016

Yongsan, central Seoul. The old building was forcibly demolished and a life-threatening accident occurred when police arrested a tenant. This fatal accident caused the tragic death of five people. An advertising sign read: ‘A chance to make the best profit in Seoul! Let's have a great life in an apartment built by the nation's top brand!" 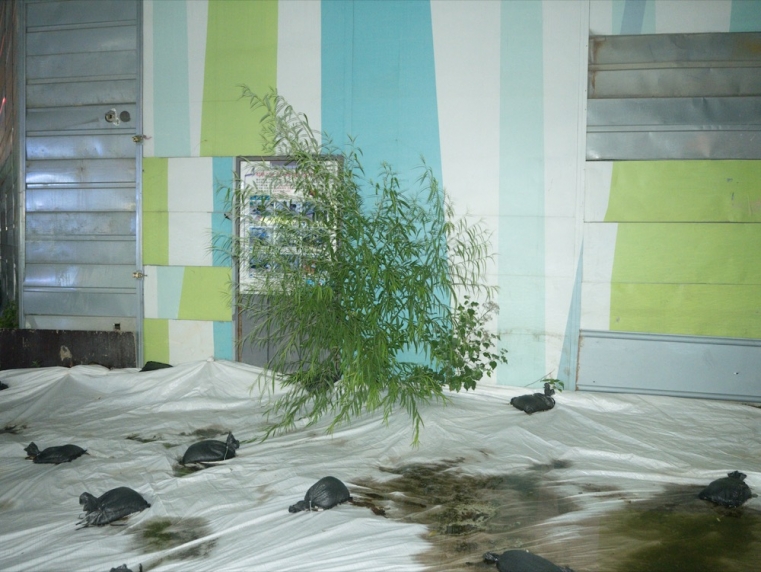 The rallies calling for the impeachment of former President,​ ​Park Geun-Hye​, were in full swing. The government remained silent, and police
officers and buses surrounded Gwanghwamun Square every day. Police videotaped and arrested protesters. The police buses filled the road forming seemingly endless walls, to threaten and isolate people in the middle of the city. 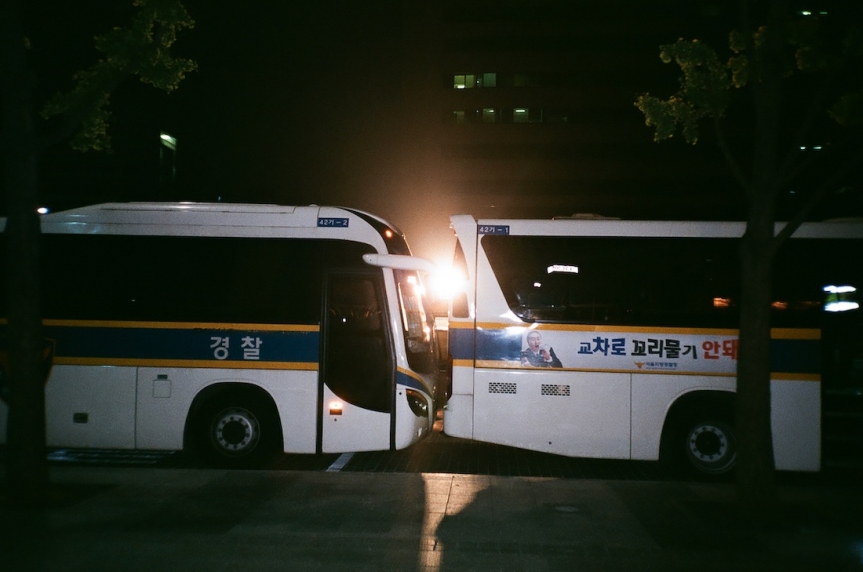 On a highway heading to Seoul, Park Geun-Hye's campaign truck passed by. The empty truck carried the slogan "Prepared Female President, A Country where Dreams Come True, A Promise to Change the World." Park Geun-Hye, who is the daughter of the dictator Park Chung-hee, a former president, was elected as the 18t​h​ President of the country. 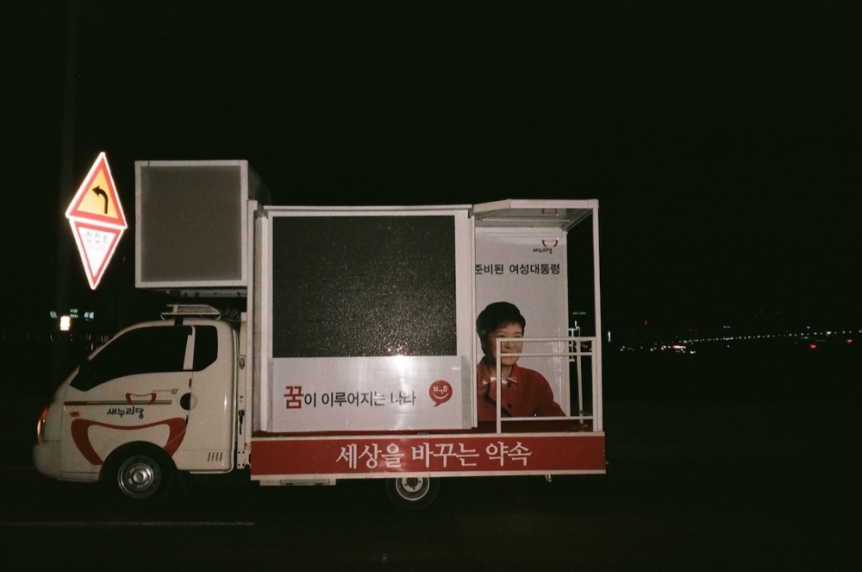 A few weeks after the presidential election, when Park Geun-Hye was elected as the 18​th President, the streets of Seoul seemed to be absolutely hopeless. 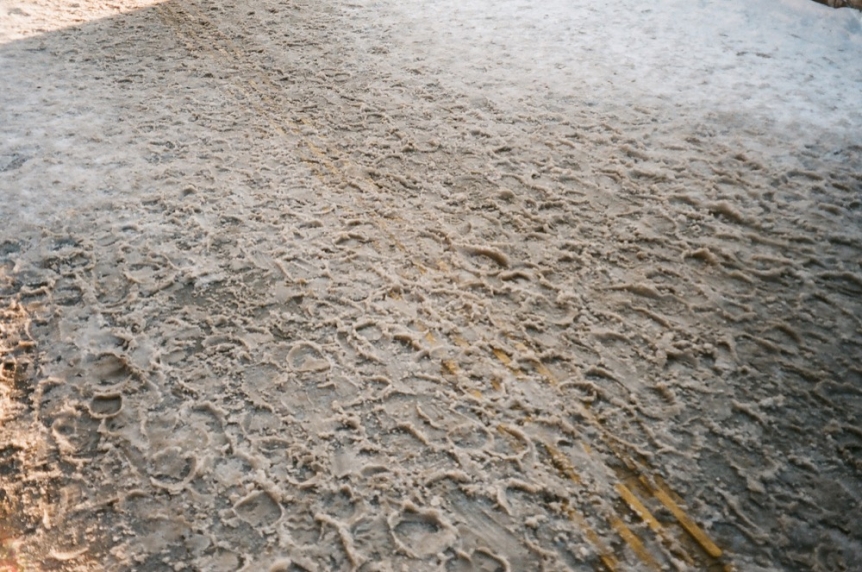 The 16​th president, progressive Roh Moo-Hyun, committed suicide after completing his presidency. Four years later, there was a memorial service for him held in Seoul. A man walked up to a memorial and stopped there for a long time. He stared blankly at a life-sized cut out with a photograph of Roh Moo-hyun, a former president. Unlike most people, he neither took pictures nor bought Merchandise. He just stood there silently and idly and gazed at the picture. 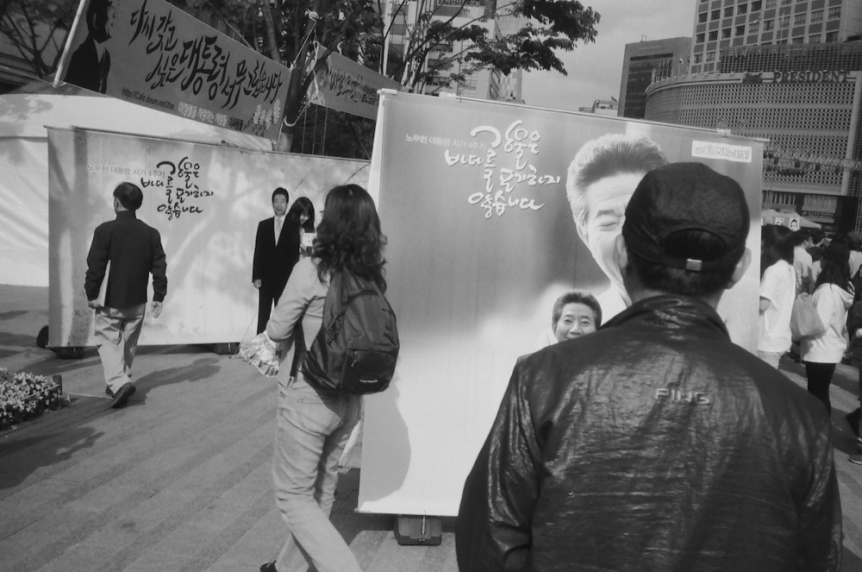 It is a stop that no one seems to use, but twice an hour the town-bus stops and people get on and off. A secret bus stop that is only available to people who know it. 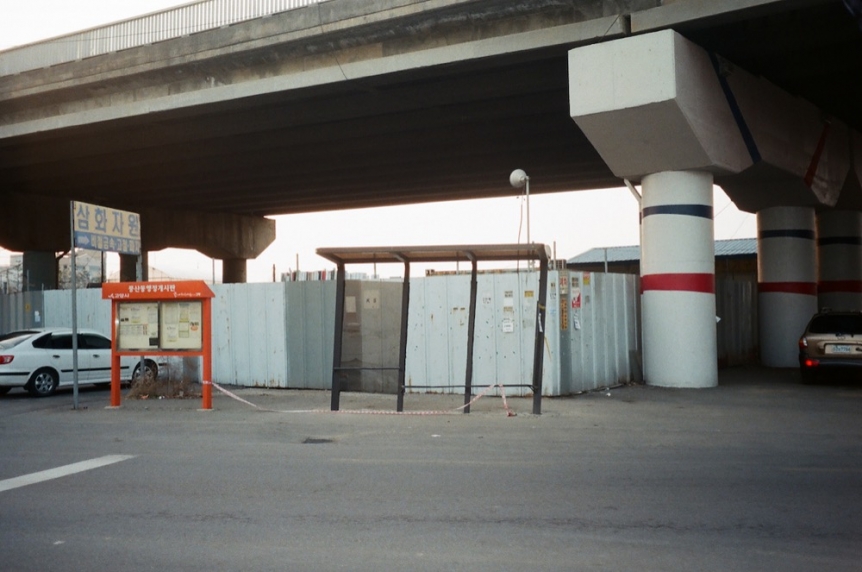 There was an uncollected campaign flag for the presidential election. 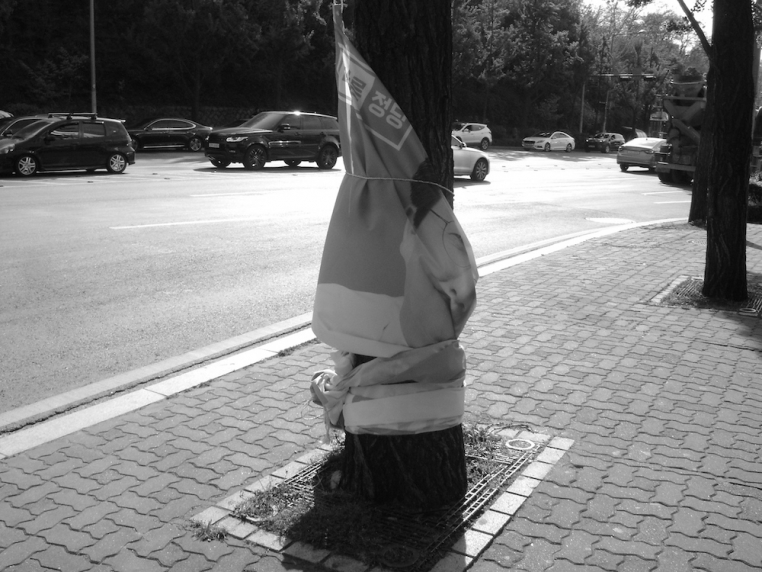 Everyone was praying their eternal love. 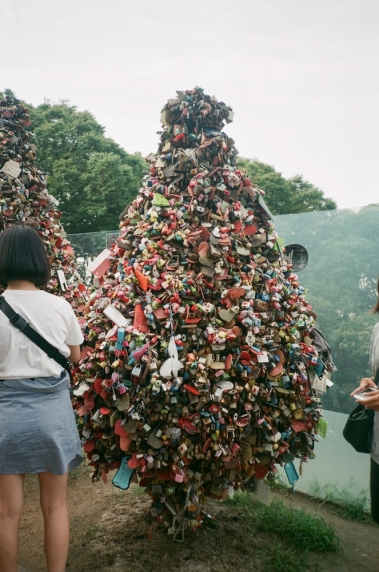 The main entrance to a high school where a certificate test was being held on a weekend. The guard's shirt was drying off in the intense sunlight.